The Denmark Bird Group is delighted that the Denmark Shire Council has approved the Bird Sanctuary on Prawn Rock Island and the adjacent sand and mud flats at the Council Meeting on 21 June 2022.

There have been compromises by all users of the area and it is hoped that everyone can utilise the Prawn Rock Channel area in harmony. The big winners are the resident shorebirds and the amazing migratory shorebirds and of course their beautiful piece of the Wilson Inlet estuarine environment which will be protected to ensure their future.

The Denmark Bird Group is now making an application for a grant to assist the Shire in funding the construction of a permanent fence across the island. We will also be working with the Shire to arrange educational signage to inform both the community and visitors of the importance of this area for the birds.

The Bird Sanctuary officially comes into effect on 14 July 2022 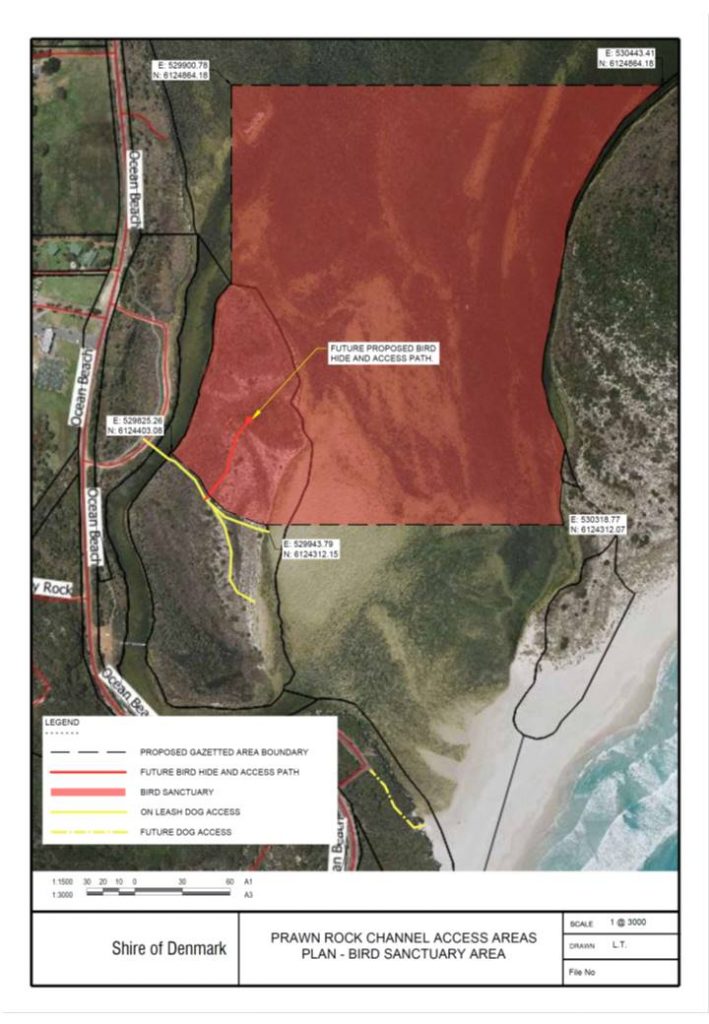 "Sanctuary" A Poem by Andrew Dickinson

Dark water from the rivers that have flowed across the land, meet the water of the ocean at a place of shifting sand.

Wind-swept from all direction, washed by rain and flooding tide. White sand reflects the suns bright glare as the seasons cycle by.

And the birds that come for refuge have traveled near and far – to raise their young, to feed a while, or rest up at the bar.

Great spans of time have come and passed since their first arrival. And through that time this place had been – a scene of shared survival.

When Man and Bird did co-exist, respectful of the other. Then from this dream the birds awoke – to find there was another.

With change the only constant, so black skin gave way to white. Respect became indifference, now people exercised their rights.

The birds were under pressure, recreation now the threat. Some people saw that this was wrong, vowed these birds they would protect.

In time they came to know these birds and how they used this place. They gathered information, which then helped them to build their case.

They campaigned long and hard, their actions spoke louder than words. With courage and strength they secured – a sanctuary for the birds.

The Bird Sanctuary Development Update as at 21 March 2022

Agenda Item 9.1.2. Bird Sanctuary  –  Officer Recommendation put to Council and a Motion was moved and seconded to accept the recommendation. An Amended Motion was then moved, seconded and carried as Council Resolution: 070322

Shire welcomes submissions about the proposed determination and/or bird sanctuary

We refer to the above and in particular the Ordinary Meeting of Council held on 15 March 2022, Agenda Item 9.1.2 and the Council Resolution: 070322 carried.

The Shire of Denmark has now advertised to the public its intention to make a determination under its Property Local Law to develop a bird sanctuary by prohibiting the traversing of land, for all unauthorised persons, except on paths provided for that purpose over the areas in maps 9.1.2a and 9.1.2b as referred to in Council Resolution: 070322

It is important to understand that the Officer Recommendation as outlined in Agenda Item 9.1.2, and which was subsequently moved and seconded did not include designated pathways.

The amendments to that motion included the following.

“with the following modification that the designated pathways are included in accordance with the bird walk outlined in Attachment 9.1.2b.”

The Denmark Bird Group’s position and background regarding the amendment to the Council Motion and the passing of Council Resolution: 070322 is as follows.

At the start it is crucial to be clear about the function of a bird sanctuary:

It is a quiet place where the welfare of birds should be the first consideration; that they be valued, be undisturbed and be enjoyed.

It is a place where the priority is bird study and the protection and a place to appreciate the flora and fauna of the island and the estuarine environment.

These principles have been embodied in the evolving outcomes of the Shire’s and the Denmark Bird Group’s deliberations for the establishment and development of the Bird Sanctuary.

The progression of planning for the sanctuary since its initial proposal in 2018 has seen its boundaries and general design evolve since then.   Much of this has occurred in consultation with local and national experts, including Birdlife Australia and importantly, with advice from Shire Officers. In addition, there has been a deliberate focus on the external boundaries of the proposed sanctuary rather than on potential infrastructure that might be considered within those boundaries.

Proposed locations for future infrastructure such as a bird hide and pathways were included in the map (now identified as Attachment 9.1.2b to the Council Resolution: 070322 of 15 March). The pathways and bird hide were intended as no more than conceptual illustrations of possible features. Further investigation was always intended as indicated in Section 9 of the sanctuary proposal document, as quoted here:

“Given the conceptual nature of this proposal, details of infrastructure requirements such as fencing, trail improvement, bird hide construction and signage have not yet been fully investigated. Should Shire approval be received, further discussions with the Shire will enable details of the infrastructure to be determined and hence estimates of costs.”

An important element of this is for the Shire to undertake a detailed topographical survey of the sanctuary area to assist to determine the most suitable location for a bird hide and access pathway within the Bird Sanctuary area. Our understanding is that such a survey would form part of a future survey of the entire Prawn Rock Channel to Ocean Precinct.

Planning has continued with ongoing productive meetings with Shire Officers to consider the location and design for a permanent fence. Tentative infrastructure ideas were also discussed and reviewed during the latter half of 2021.

In consultation with Shire Officers, large scale aerial maps have been used to identify, subject to a detailed topographical survey, a probable route for a central pathway and gate leading to a bird hide. Initial research indicates the high ground through the mid-north east area of the island would be appropriate for a single, return pathway and for a bird observation hide and community education centre (refer to map illustration enclosed).

This suggested pathway would minimise ground disturbance and ensure protection of a nationally recognised Threatened Ecological Community – Coastal Saltmarsh (TEC), listed under the Environment Protection and Biodiversity Conservation Act, which occurs closer to the shoreline. Damage to the increasingly fragile edges of the island would be lessened by utilising a more central, high ground pathway. During recent years and particularly during 2021, the island perimeter, together with the island’s peripheral vegetation, has been adversely affected by high water levels and wave actions. Furthermore, by encouraging human activity away from the island perimeter disturbance to bird habitat, nesting and feeding areas both around and close to the shoreline would be minimalised.

The proposed elevated site for a hide would also provide extensive views to the bar and out to the delta and around the bay to the north thereby enhancing observation opportunities from the hide. A proposed elevated pathway would also provide enhanced viewing of the surrounding areas, including the central vegetated areas of the island where opportunities would be available for the community and visitors to also observe other birdlife and endemic wildlife.

While these features were being reviewed, no changes have been made to the map (cited as Attachment 9.1.2b in the Council Resolution) as on going discussions with the Shire will be necessary.

It is important for the Denmark Community to be aware of the statement recently been posted on the Your Denmark web site in relation to the Bird Sanctuary development and which reads as follows.

“Community members may be aware of a Bird Sanctuary Proposal which was provided to Council by the Denmark Bird Group. That proposal is NOT what is under consideration – it was simply used to supply information to Council on why a bird sanctuary should be considered for the area.”

In conjunction with the Bird Sanctuary, the island has considerable biodiversity importance including the TEC, which has yet to be fully explored and documented.  Accordingly, infrastructure siting, development and access should be implemented with care and sensitivity towards all environmental values.  This will be the aim for the Denmark Bird Group as the Bird Sanctuary development progresses.

It is important to confirm, as has been outlined in this submission it was never the intention of the Denmark Bird Group and as we understand, neither was it the intention of Shire Officers to consider anything other than conceptual infrastructure ideas within the Bird Sanctuary development area until some later date when all options will be explored and fully considered.

At this time, an elevated, central return pathway from the southern boundary to a bird hide and community education centre is the strongly preferred option of the Denmark Bird Group.

The enclosed map provides a sketch illustration for a central pathway, marked in yellow and a hide, marked in green. 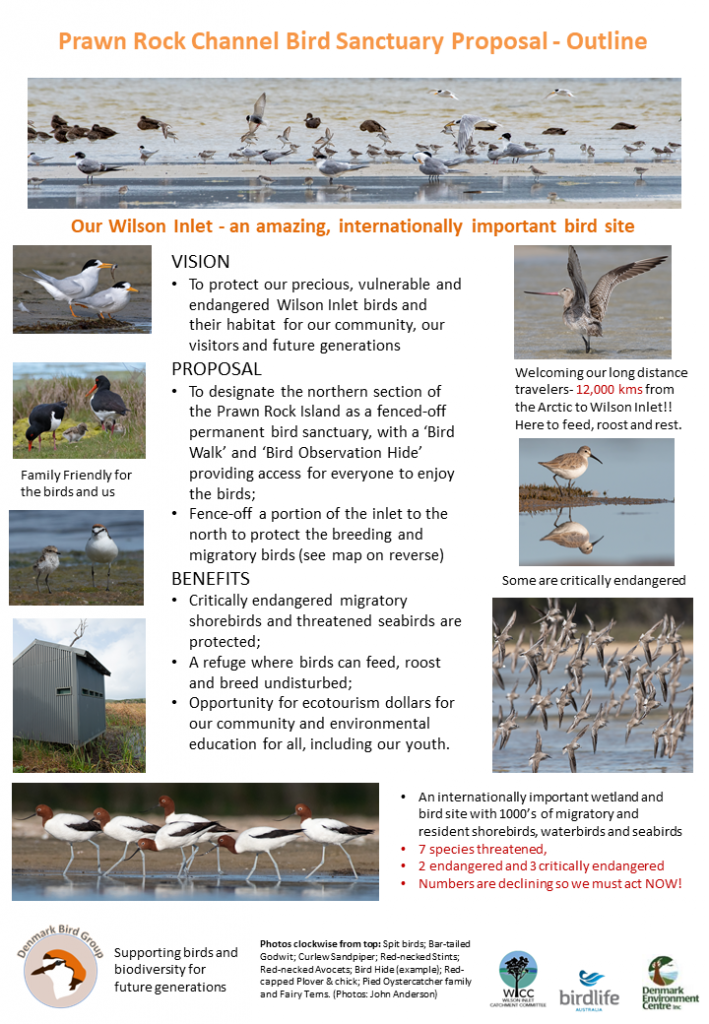 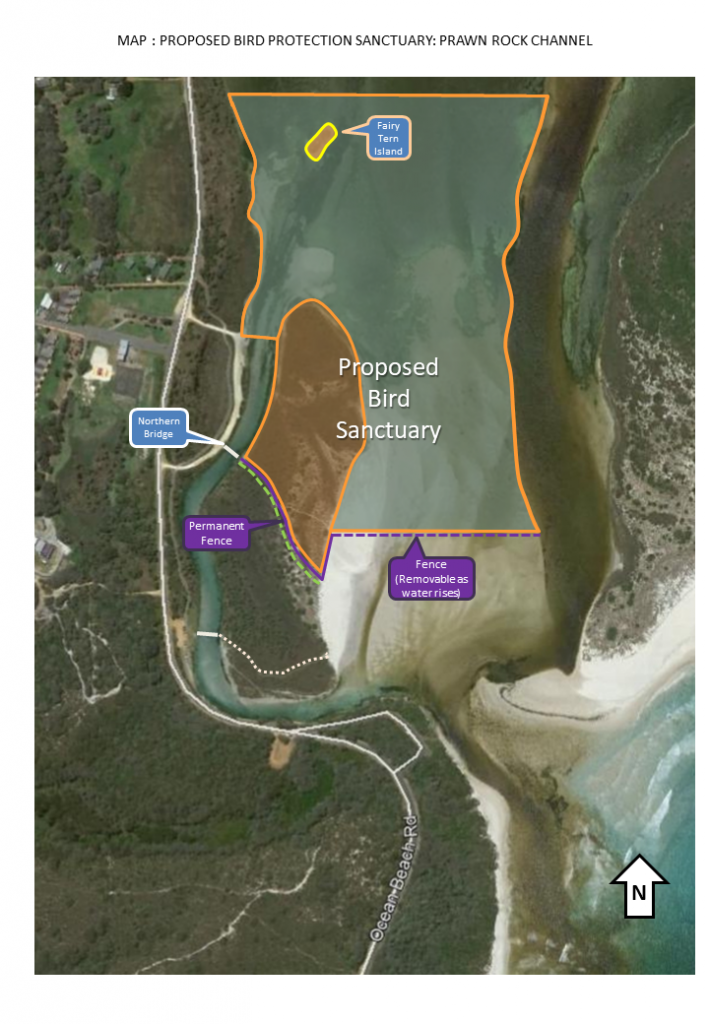 Shorebirds including Pied Oystercatchers and Red-capped Plovers nest along the Island shoreline.

Our Migratory Shorebirds travel immense distances from their Arctic breeding grounds, sometimes in excess of 12,000km so that they can rest, recuperate and prepare themselves for the return journey. Their numbers have been falling at a rate of 10% per annum as a result of industrial development depriving them of feeding grounds in the Yellow Sea, rapid changes in the Arctic environment and more extreme weather.

There are many other bird species that use the shallow waters at the mouth of the Wilson Inlet or the habitat on the Island.